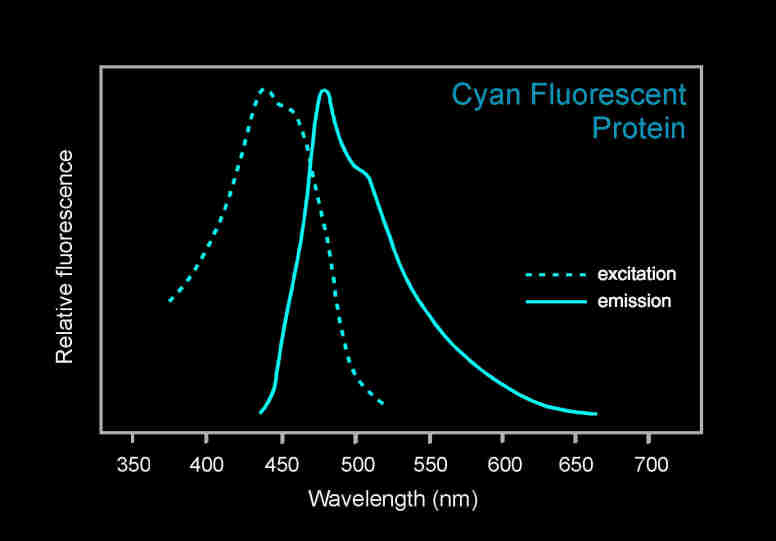 Cyan Fluorescent Protein (CFP) is a versatile biological marker for monitoring physiological processes, visualizing protein localization, and detecting transgenic expression in vivo. CFP can be excited by the 405 nm laser line and is optimally detected at 485 nm.

The first fluorescent protein emitting in the bluish-green cyan spectral region (CFP; ranging from approximately 470 to 500 nanometers) was discovered simultaneously with BFP during mutagenesis studies that converted the tyrosine residue in the GFP chromophore to tryptophan (Y66W). This single mutation yielded a chromophore that displays an absorption maximum at 436 nanometers with a very broad fluorescence emission spectral profile centered at 485 nanometers. Subsequent refinements, including the F64L maturation improvement and S65T (discussed in the Green Fluorescent Protein section), resulted in the production of an enhanced version (ECFP; see Figure 2) with greater brightness and photostability. Even these modifications failed, however, to increase the brightness level of ECFP beyond 40 percent of that shown by EGFP. Other than providing an additional hue for multicolor imaging, initially the most promising aspect of ECFP was the potential for utility as a biosensor FRET partner with yellow fluorescent proteins in widefield and confocal microscopy using blue-violet filter sets or the 457-nanometer spectral line of an argon-ion laser. Greater photostability compared to EBFP also positions ECFP as a more useful protein for time-lapse imaging in localization and dynamics studies.

By far the most successful applications using ECFP have taken advantage of the ability of this variant to be coupled with yellow fluorescent protein (YFP) and derivatives to generate FRET biosensors capable of monitoring a wide spectrum of intracellular processes (see Figure 3). Although a host of FRET investigations have been performed using the ECFP-EYFP pair, the experimental results are often problematic due to limitations in the fluorophore properties that restrict measurements to a small dynamic range. A majority of these biosensors exhibit a typical overall ratio change of 10 to 30 percent during FRET analysis, with a few exceptions. Such a low level of contrast presents difficulties with modern digital microscopy due to a noise level that can approach 10 percent of the signal at low imaging intensities. These biosensors are further complicated by the potential to form dimers when constrained with tight two-dimensional spatial restrictions such as those that exist in membranes. To overcome the artifacts associated with dimerization, hydrophobic residues at the dimer interface were replaced with positively charged amino acids in both ECFP and EYFP to produce true monomeric variants (mCFP and mYFP), which achieve a far higher level of efficiency in FRET experiments. The critical mutation is the substitution of lysine for alanine at position 206 (A206K), which can be applied to virtually any Aequorea victoria variant in order to generate a true monomer capable of superior performance in applications such as localization, FRET, and protein dynamics. Despite the host of improvements in CFP and the large database of experiments performed with this variant, continued investigation has produced additional useful fluorescent proteins in the cyan spectral class. Among the improved cyan fluorescent proteins that have recently been introduced, CyPet and an enhanced cyan variant termed Cerulean show the most promise as fusion tags, FRET biosensors, and for multicolor imaging (see Figures 1, 3, and 11). The Cerulean fluorescent probe (named for the sky-blue color) was rationally engineered by site-directed mutagenesis of enhanced cyan fluorescent protein to yield a higher extinction coefficient, improved quantum yield, and a fluorescence lifetime decay having a single exponential component (useful in lifetime decay measurements of FRET). Cerulean is at least 2-fold brighter than enhanced cyan fluorescent protein and has been demonstrated to significantly increase contrast as well as the signal-to-noise ratio when coupled with yellow-emitting fluorescent proteins, such as Venus (discussed below), in FRET investigations. In addition to site-directed mutations designed to improve folding and brightness, random mutagenesis was conducted on pre-Cerulean variants to further increase the molar extinction coefficient, and the optimized protein has been "monomerized" to enhance its utility in fusions. The abundance of advantageous features afforded by Cerulean render this protein the most useful all-purpose cyan derivative.

The cyan fluorescent protein variant referred to as CyPet (the acronym for: Cyan fluorescent Protein for energy transfer) was derived through a quantitative and unique strategy utilizing fluorescence-activated cell sorting to enhance the cyan and yellow pairing for FRET. Note that in designing probes for FRET investigations, optimization of the donor quantum yield and the acceptor extinction coefficient, as well as the overlap integral between these variables, are among the most critical parameters for achieving improved efficiency. Libraries of CFP and YFP variants were screened for FRET efficiency and the best clones were subjected to several evolutionary cycles consisting of random mutagenesis and synthetic DNA shuffling. A total of seven mutations resulted in the production of the CyPet protein, which features absorption and emission maxima positioned at 435 and 477 nanometers, respectively. CyPet is about half as bright as EGFP and two-thirds as bright as Cerulean, but expresses relatively poorly at 37 degrees Celsius. However, when paired with its FACS-optimized partner, YPet, in FRET biosensors, this cyan variant exhibits a dynamic range that is more than six times higher than CFP-YFP, dramatically improving contrast and potentially leading to far more sensitive detection of subtle intracellular processes. CyPet has a more blue-shifted and narrower fluorescence emission peak than mCFP, which greatly increases its utility in multicolor imaging, and is the most photostable cyan fluorescent protein of the weakly dimeric and monomeric versions currently available.

Several potentially useful cyan proteins have been isolated in Anthozoan species. Derived from the reef coral Anemonia majano, the AmCyan1fluorescent protein, which is now commercially available (Clontech), has been optimized with human codons for enhanced expression in mammalian cell systems. Originally named amFP486 (am, Anemonia majano; FP, fluorescent protein; 486 emission maximum) in accordance with a nomenclature scheme devised to simplify the discussion of myriad Anthozoan proteins, this variant exhibits a similar brightness level, but a significantly better resistance to photobleaching than CFP. The absorption maximum of AmCyan1 occurs at 458 nanometers while the fluorescence emission peak resides at 489 nanometers. Note that both peaks are shifted to longer wavelengths by 19 and 13 nanometers, respectively, compared to ECFP. On the downside, similar to most of the other reef coral proteins, the probe has a tendency to form tetramers, which will significantly complicate attempts to employ this protein as a fusion tag or a FRET biosensor. 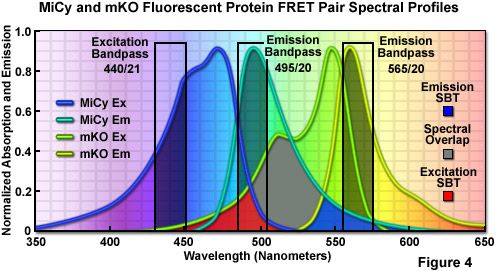 First isolated by Miyawaki and associates from an Acropara stony coral species, the cyan-emitting Midori-Ishi Cyan (abbreviated MiCy) probe was originally designed as the donor in a new FRET combination with the monomeric Kusabira Orange (mKO) fluorescent protein to generate a biosensor probe with high spectral overlap (Förster distance of 5.3; see Figure 4; mKO is discussed in the section on Orange Fluorescent Proteins). This protein features the longest absorption and emission wavelength profiles (472 and 495 nanometers, respectively) reported for any probe in the cyan spectral class. The high molar extinction coefficient and quantum yield exhibited by MiCy render the protein of equal brightness to Cerulean, although the spectra are far more sensitive to pH. Also similar to Cerulean, MiCy features a single exponential lifetime decay component with a time constant of 3.4 nanoseconds, which should be useful for measurements of FRET in combination with fluorescence lifetime imaging microscopy (FLIM). An unusual feature of MiCy is that it forms a homodimeric complex similar to the GFP variant isolated from the bioluminescent sea pansy, Renilla reniformis, rather than the obligate tetramer observed in most coral reef species. Although the dimerization motif may be a problem in some fusion proteins, it should be far easier than a tetramer to mutate MiCy into a true monomer.

Recently, a new monomeric cyan fluorescent protein having superior brightness, insensitivity to acidic conditions, and photostability has been introduced for live-cell imaging applications of fusion partners, and as a FRET donor for yellow and orange acceptor fluorescent proteins in biosensors. Termed mTFP1 (monomeric teal fluorescent protein 1), the variant was produced from a synthetic gene library built around the tetrameric cyan protein, cFP484, originating from a Clavularia soft coral. Displaying red-shifted spectral profiles (excitation and emission maxima at 462 and 492 nanometers, respectively) when compared to other cyan members of this spectral class, mTFP1 has a total of 31 amino acid substitutions relative to the wild-type tetramer. The red-shifted spectra were considered when classifying the new color as teal rather than cyan. Unlike other members of the cyan fluorescent protein group, which generally feature the aromatic amino acid tryptophan at position 66 in the chromophore, mTFP1 contains the classical tyrosine residue at this location, characteristic of many GFP derivatives. Substituting tyrosine for tryptophan reduces the broad fluorescence emission spectral width from approximately 60 nanometers to a narrower and more manageable 30 nanometers, a factor that is useful for reducing bleed-through in multi-color experiments. The high quantum yield (0.85) of mTFP1 provides an excellent alternative to the cyan derivatives, mCFP and mCerulean, as a FRET donor having a Förster distance exceeding 5.0 when combined with either yellow or orange fluorescent proteins.

Illustrated in Figure 4 are the absorption and emission spectral profiles of MiCy and mKO along with recommended bandpass filters for excitation and gathering of fluorescence emission for FRET analysis using the two probes. The overlap region between the emission spectrum of MiCy and the absorption spectrum of mKO is presented with a gray fill, while the excitation and emission spectral bleed-through regions are shown in red and blue fills, respectively. Applying an excitation bandpass filter centered at 440 nanometers with a 21-nanometer bandwidth reduces the level of excitation of mKO, and the 495/20-nanometer emission filter enables analysis of the donor emission (MiCy) fluorescence without contamination of signal from the acceptor (mKO). The 565/20-nanometer acceptor bandpass filter encompasses the maximum emission region of mKO with approximately 7-10 percent bleed-through of the MiCy signal. A dichromatic mirror having a cut-on wavelength of 485 nanometers (not illustrated) should be utilized with this filter combination.